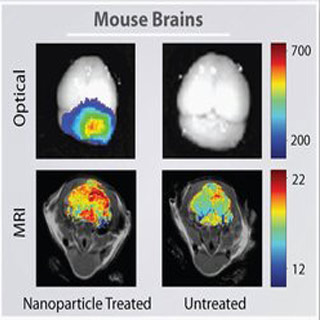 Brain cancer is known to be one of the deadliest types of cancer and also it’s very complex to cure. Apparently, imaging results are generally imprecise because brain cancers appear to be extremely invasive. Researchers at the University of Washington seemed to have discovered that chlorotoxin when combined with nanoparticles may considerably slower down the tumors’ spread.

Lead author Miqin Zhang, a UW professor of materials science and engineering stated that, “Brain cancers are very invasive, different from the other cancers. They will invade the surrounding tissue and there is no clear boundary between the tumor tissue and the normal brain tissue.”

“If we can inject these nanoparticles with infrared dye, they will increase the contrast between the tumor tissue and the normal tissue. So during the surgery, the surgeons can see the boundary more precisely. We call it ‘brain tumor illumination or brain tumor painting. The tumor will light up,” elucidates Zhang.

Zhang claimed that nano-imaging could also assist in detecting cancer at an early. It was believed that current imaging techniques have a greatest resolution of 1 millimeter. Thus, nanoparticles could improve the resolution by a factor of 10 or more thereby allowing the detection of smaller tumors and also treatment at an earlier stage.

It was observed that till today, nanoparticle which was used for imaging has been unable to cross the blood-brain barrier and particularly attach themselves to brain-tumor cells. However, with the assistance of recent techniques, doctors seem to inject dyes inside the body and use drugs in order to open the blood-brain barrier for a temporary period of time. Allegedly, this has a risk on the infection of the brain.

The UW team was believed to have overcome this challenge by creating a nanoparticle which remains small in wet conditions. It was estimated that the particle was nearly 33 nanometers in diameter when wet, and approximately one third the size of similar particles used in other parts of the body.

Evidently, crossing the blood-brain barrier depends on the size of the particle, its lipid, or fat content, and the electric charge on the particle. For this purpose, Zhang along with her colleagues built a particle which could pass through the barrier and reach tumors. They were noted to have used chlorotoxin in order to particularly target tumor cells. Chlorotoxin is known to be a small peptide isolated from scorpion venom. On the nanoparticle’s surface Zhang placed a small fluorescent molecule for optical imaging, and binding sites which could be utilized for attaching other molecules.

Zhang hopes that future research will be able to assess the nanoparticle’s possibility for treating tumors. They hope to spot whether this ability could extend to brain cancer which appears to be the most common solid tumor mainly affecting the children.

The findings of the research have been published in the journal Cancer Research.