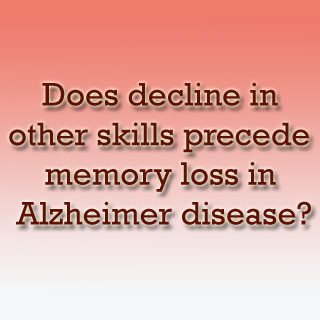 A study claimed that cognitive abilities other than memory, including visuospatial skills required to distinguish relationships between objects, may decline years before a clinical detection of patients with Alzheimer’s disease.

The authors provided background information by mentioning that recent studies have focused on identifying the beginning of the transition from healthy aging to dementia.

The authors commented, “As new interventions become available, it will become important to identify the disease as early as possible.”

Loss of episodic memory i.e. identifying events in one’s life that could be clearly affirmed, is said to be generally associated to Alzheimer’s disease, but it is supposedly not the only feature of cognition i.e. thinking, learning and memory, that is impacted.

David K. Johnson, Ph.D., of the University of Kansas, Lawrence, and colleagues examined about 444 individuals who did not suffer from dementia when they were enlisted in the study, between 1979 and 2006. Upon participating, every subject went through a clinical assessment and a psychometric examination including tests of four cognitive factors i.e. global cognition, verbal memory, visuospatial skill and working memory. The subjects were then apparently examined at least one more time prior to November 2007.

Over an average follow-up of 5.9 years, around 134 individuals suffered from dementia and about 310 did not; approximately 44 with dementia died and went through brain autopsies that established a detection of Alzheimer’s disease. By means of data from the psychometric assessments, the experts built models to assess the reduction in a variety of cognitive regions before individuals were detected with dementia.

The authors mentioned, “A novel finding was that visuospatial abilities demonstrated an inflection point [sudden change to a steeper slope of decline] three years before clinical diagnosis.”

Reduction in by and large cognitive abilities apparently followed in the next year, while inflection points for verbal and working memory were supposedly not seen until one year prior to clinical diagnosis. Similar outcomes supposedly happened in only the subgroup of people with Alzheimer’s disease diagnosis established by autopsy.

The authors remarked, “There are several implications of this study. Some of the earliest signs of preclinical disease may occur on tests of visuospatial and speeded psychomotor skills. Furthermore, the greatest rate of preclinical decline may occur on executive and attention tasks. These findings suggest that research into early detection of cognitive disorders using only episodic memory tasks, such as word lists or paragraph recall, may not be sensitive to either all of the earliest manifestations of disease or the most rapidly changing domain.”

The authors concluded by mentioning that in summary, converging longitudinal evidence suggests that after a sharp departure from the relatively flat course of normal aging there is a preclinical period in Alzheimer’s disease with insufficient cognitive decline to warrant clinical diagnosis using conventional criteria but that can be seen with longitudinal data from multiple domains of cognition and not just memory.

The study was published in the October issue of Archives of Neurology, one of the JAMA/Archives journals.