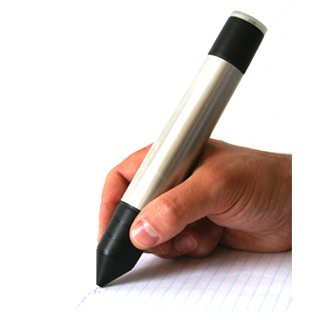 Advancement in technology has given rise to a number of devices that are proven beneficial in the health-space. Scientist Miguel Bruns Alonso has now designed a pen which not only measures stress levels of the person using it, but also helps decline that stress. The newly developed pen can possibly identify ‘nervous’ movements and determine whether the user is stressed or not.

Various experiments were carried out which demonstrate that when tense, people tend to play with the pen in their hands. On encouraging individuals to check these nervous movements, or make more gentle movements, they supposedly gain more control over a situation. Sensors in a pen may dole out an unobtrusive way of measuring stress levels. At the time of the investigation, the heart rate of people who used the anti-stress pen seemingly fell by an average of five percent. Providing users with accurate feedback can apparently aid in empowering them to deal with their stress in a constructive manner.

Apart from detecting ‘nervous’ movements, the pen also offers a counterweight to these movements through built-in electronics and electromagnets. As the pen identifies that the quicker movements are linked with stress, it may slowly become more difficult to move around. Therefore, users move in a more relaxed way and the pen in turn is more easy to use again. Among the study subjects who were provided with feedback on their behavior, 5 percent were registered with lower heart rate than those who received no feedback. These participants also claimed to feel less stressed. Currently the pen is a prototype and not available for purchase.

Importance of Exercise and Facing the Demon called ‘The Work-Out’