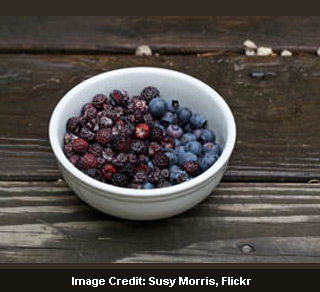 Hypertension commonly referred to as high blood pressure apparently is one of the major cardiovascular diseases all around the world. A groundbreaking study commenced by the University of East Anglia and Harvard University suggests take intake of blueberries protects against high blood pressure. It was affirmed that bioactive compounds in blueberries known as anthocyanins are beneficial in reducing hypertension.

Anthocyanins are known come from the bioactive family of compounds called flavonoids. Blackcurrants, raspberries, aubergines, blood orange juice and blueberries are considered as rich sources of flavonoids. Apart from many fruits, vegetables, grains and herbs, flavonoids may also be discovered in tea, fruit juice, red wine and dark chocolate. In order to analyze the effect of different flavonoids on hypertension, scientists enrolled 134,000 women and 47,000 men without hypertension. Volunteers were made to fill in health questionnaires every two years and their dietary intake was scrutinized every four years.

Newly diagnosed hypertension during the 14-year period was probably linked with consumption of various different flavonoids. Throughout the study, a total of 35,000 participants were registered with hypertension. Having evaluated the acquired dietary information, tea was concluded as the main contributor of flavonoids. Even apples, orange juice, blueberries, red wine, and strawberries seem to be good sources of bioactive compound. Investigators then studied the possible association between individual subclasses of flavonoids and hypertension.

Prof Aedin Cassidy of the Department of Nutrition at UEA’s Medical School and lead author, alleged, “Our findings are exciting and suggest that an achievable dietary intake of anthocyanins may contribute to the prevention of hypertension. Anthocyanins are readily incorporated into the diet as they are present in many commonly consumed foods. Blueberries were the richest source in this particular study as they are frequently consumed in the US. Other rich sources of anthocyanins in the UK include blackcurrants, blood oranges, aubergines and raspberries.”

It appeared that subjects consuming the highest amounts of anthocyanins are 8 percent less likely to be diagnosed with hypertension than those consuming the lowest amounts. Anthocyanins may be mainly found in blueberries and strawberries. This effects was supposedly stronger among those under the age of 60 years. In comparison to volunteers who did not eat blueberries, those consuming at least one serving a week apparently had declined chances of developing the condition by 10 percent. Further investigations will be carried out gauge the optimal dose and sources for hypertension prevention.

The study is published in the American Journal of Clinical Nutrition.