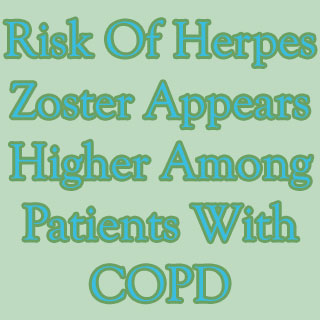 Chronic obstructive pulmonary disease (COPD) is a common lung disease that seemingly hampers the ability of an individual to breathe. A latest study claims that COPD patients with systemic inflammation and dysregulated immune function have heightened chances of being diagnosed with herpes zoster. Known to be caused due to the virus that triggers chicken pox, herpes zoster appears as a painful, blistering skin rash.

Investigators conducted a cohort study by analyzing data from the Taiwan Longitudinal Health Insurance Database. Cox regressions were performed to compare the hazard ratio (HR) of herpes zoster in the COPD cohort and in an age- and sex-matched comparison cohort. Patients suffering from COPD were segregated into three groups on the basis of steroid medications put to use. A total of 8,486 patients and 33,944 matched control patients were included in the investigation.

Scientists also considered potential confounding factors while ascertaining the risk of herpes zoster. Yang, K-H Wang from the Department of Dermatology, School of Medicine, College of Medicine, Taipei Medical University and colleagues found that incidences of herpes zoster were on a rise among COPD patients who did not take steroid medications. Having adjusted HR of herpes zoster, scientists registered a slightly greater risk for patients with COPD who inhaled corticosteroids only. The threat of herpes zoster appeared highest among those who used oral steroids.

In conclusion, it was asserted that COPD patients have more chances of herpes zoster and those employing oral steroids are under the greatest threat.