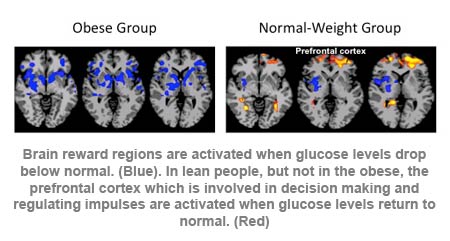 Ever wondered why those steaming hot fries seem so filling for the stomach? Well, a study conducted by scientists from the Yale University and the University of Southern California has revealed that if the brain is not sufficiently nourished, we tend to experience greater desire for high-calorie food.

As per observations in the brain imaging scans, when the proportion of glucose in the brain drops, a portion of the brain linked to emotions and impulses apparently loses its capacity to repress cravings for high-calorie food.

“Our prefrontal cortex is a sucker for glucose,” remarked Rajita Sinha, the Foundations Fund Professor of Psychiatry, and professor in the Department of Neurobiology and the Yale Child Study Center, one of the senior authors of the research.

The analysts believe that when glucose levels of the brain go down, a part of the hypothalamus in the brain seemingly acquires a sensation. Other areas namely the insula and striatum related to reward seeking behaviors appear to be activated. This may cause an urge to eat. It was found that as glucose in the brain falls, the prefrontal cortex apparently loses its capability to restrict signals to eat produced in the striatum. This weakened influence was specifically seen in obese people when they look at high-calorie foods.

The investigators also noted that the stress hormone cortisol seemed to play a prominent role than glucose in setting the brain’s reward centers to action. Also, striatum supposedly became overactive when there was less glucose. According to Sinha, stress due to glucose drops may contribute immensely in the activation of the striatum. Sinha concludes that consuming healthy foods that sustain glucose levels holds the key. The brain requires its food, she says.

The study is published in The Journal of Clinical Investigation.