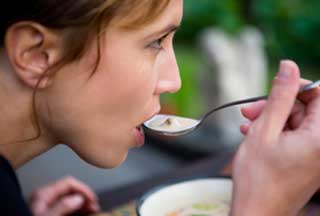 BPA exposure is undoubtedly harmful for the body, particular during pregnancy where the child is also vulnerable to risk. This study by scientists from the Harvard School of Public Health has disclosed that canned soup apparently led to more than 1,000% increase in urinary bisphenol A (BPA) proportions.

In the trial, one set of people were given 12 ounces of vegetarian canned soup on a daily basis while the second group was given the same amount of fresh vegetarian soup with no canned constituents, for a span of 5 days. Following a washout phase of 2 days, the groups were interchanged.

“Previous studies have linked elevated BPA levels with adverse health effects. The next step was to figure out how people are getting exposed to BPA. We’ve known for a while that drinking beverages that have been stored in certain hard plastics can increase the amount of BPA in your body. This study suggests that canned foods may be an even greater concern, especially given their wide use,” explained Jenny Carwile, a doctoral student in the Department of Epidemiology at HSPH and lead author of the study.

As per the outcomes, about 75 urine specimens of people who had canned soup was seemingly associated with 1,221% growth in BPA levels, as compared to samples attained after fresh soup consumption.

However, the team cautioned that this rise in urinal BPA amounts could be a short-term effect and more tests to gauge the duration are required. The study is published in the Journal of the American Medical Association (JAMA).