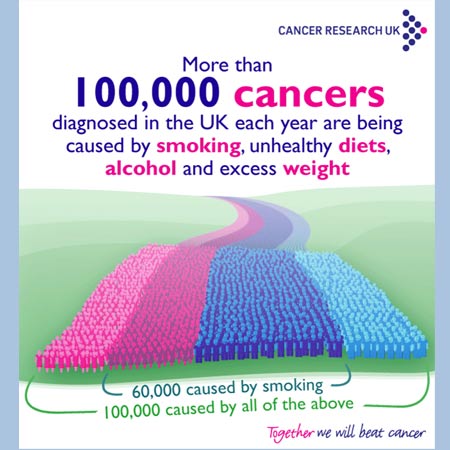 Most professionals may agree that the causes of cancer are as ambiguous as the disease itself. Unleashing an apparent set of risk factors for cancer, scientists from Cancer Research UK have unfolded smoking, drinking, unhealthy eating habits and obesity to be the leading causes of cancer in the UK.

Around 100,000 cancers are diagnosed in the UK every year, the figure further reached 134,000 when all the 14 lifestyle and environmental risk variables were taken into account. In this study, the most significant lifestyle risk factor that came forward was smoking which led to almost 23% of cancers among males and 15.6% in women.

Professor Max Parkin, a Cancer Research UK epidemiologist based at Queen Mary, University of London, and study author, commented, “Many people believe cancer is down to fate or ‘in the genes’ and that it is the luck of the draw whether they get it.” 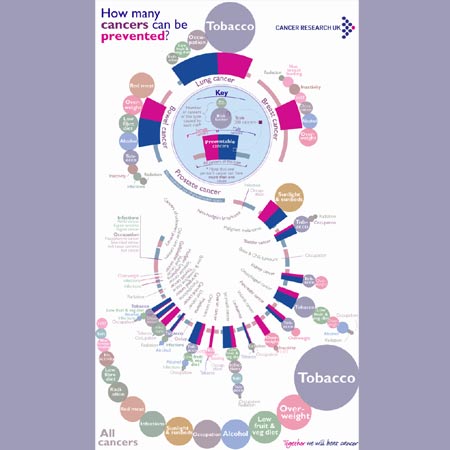 Cumulatively, the scientists found that the prevention of almost 40% of cancers is seemingly in our hands. Notably, fruits and vegetables came across as an essential avenue in shielding men against cancer. Also, the risk associated with being overweight was supposedly more than alcohol, especially among women.

As per estimations, the aforesaid risk parameters accounted for about 34% cancers that took place in 2010. The team concluded that the intent of the study is not to discourage people from engaging in alcohol and other such practices but to inform people that basic lifestyle modifications could have long term impact on cancer risks.

The study is published in the British Journal of Cancer.