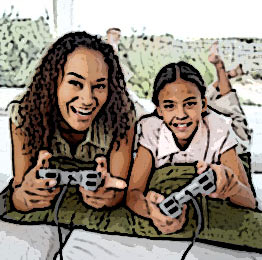 A new research has shown that playing video games can satisfy deeper psychological needs, and in the short term, improve people’s well-being.

The more a game fulfilled a player’s sense of independence, achievement and connectedness to others, the more likely he or for that matter she was to keep playing, said Dr. Scott Rigby of Immersyve , a Florida-based virtual environment think tank, and colleagues from the University of Rochester in New York.

The more fully a player’s needs were satisfied, the better he felt after playing. “We think this is really one of the first validated models of what is going on psychologically when people are playing video games,” Rigby said. To date, he noted, research on video games has focused on their potentially harmful effects, such as promoting social isolation, addiction, and violence.

While the findings don’t prove that “video games are always good for you,” Rigby noted, they do help to provide a more balanced understanding of people’s motivations for playing them. “We’re trying to in some sense normalize how people look at video games, rather than seeing them as having some mystical power to addict.”

In four studies reported in the journal Motivation and Emotion, Rigby and his colleagues sought to understand people’s motivation for playing the games and the games’ immediate effect on well-being.

In the first study, they had 89 people play a simple game involving jumping to different platforms. In the second phase, the researchers compared the experience of 50 people who played two 3-D adventure games, one very popular and one less so. In the third study, 58 people tried four different games, while in the fourth the researchers surveyed 730 members of an online gaming community who were experienced in playing “massively multiplayer online” games.

Players’ enjoyment of games depended on whether the games made them feel competent and independent, and, in the case of multiplayer games, connected to other players. Players who enjoyed their experience showed increases in well-being, self-esteem, and vitality after playing, while those whose needs weren’t satisfied reported lowered vitality and mood.

Mastering challenges in video games can be a healthy way of coping when opportunities for feeling independent or competent are scarce in the real world, he argued.

“Video games in some ways are very good at satisfying these psychological needs,” Rigby noted. “Often times real life is not as clear…real life often can make you feel ineffective.”