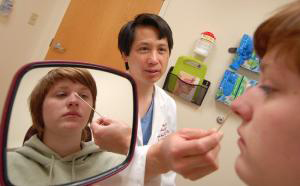 Researchers have said that treating skin wounds with a gel made from a patient’s own blood platelets speeded up the healing process. This study shows how doctors may be able to harness the body’s innate healing ability.

Skin wounds treated with this gel healed about 10% faster than wounds in the same people treated with only an antibiotic ointment.

Although the study was published in the Archives of Facial Plastic Surgery, the researchers have cautioned that this was a small pilot study with only eight people being examined. However, they have also said that the concept could well change the way doctors deal with wounds, whether big or small.

Study leader Dr. David Hom of the University Of Cincinnati College Of Medicine in Ohio siad, “I’m excited about it as it changes our way of thinking about wounds. Instead of just watching it passively heal, we can now actively intervene to possibly speed it up.”

Hom said that improving wound healing could patients out of the hospital and home more quickly after surgery, reduce the chances of complications and help people such as diabetics or chemotherapy patients prone to poor healing.

Hom also stated that wounds that ordinarily would heal fully in 28 to 30 days instead healed two or three days more quickly when the concentrated topical gel was applied to them.

The researchers processed a patient’s own blood into concentrated plasma packed with platelets- vital to blood clotting- and then applied a gel that could be applied directly to the wound.

For the study, the gel was applied to the wounds on one thigh but not the other, and the healing process was tracked for six months.

Hom said, “By concentrating a person’s own blood and giving it back to the patient into the patient’s wound, we basically concentrated the growth factors (proteins) “which are important in wound healing in attempting to improve their healing.”