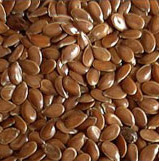 US researchers have published new studies that take a look at alternative medicine. It was reported that flaxseed slowed the growth of prostate tumors in men, while ginseng helped relieve the fatigue that cancer patients often feel.

According to Dr.Bruce Cheson of Georgetown University Hospital in Washington, patients are taking these compounds, but we need to know if they are doing any good or any harm” Cheson presented the findings to a meeting of the American Society of Clinical Oncology.

In the flaxseed study, researchers at Duke University Medical Center in North Carolina evaluated the seed’s role as a food supplement in 161 men who were scheduled to undergo surgery for prostate cancer.

“The growth rate was decreased in the men who got flaxseed,” said Dr. Nancy Davidson, an oncologist at John Hopkins University in Baltimore.

We were looking at flaxseed because of its unique nutrient profile,” said Wendy Demark-Wahnefried, a researcher in Duke’s School of Nursing. In the study, half of the men added 30 grams of flaxseed daily to their diets for about 30 days. And half of the flaxseed group also went on a low-fat diet.

After the surgery, the researchers looked at the men’s tumour cells to see how quickly the cancer had multiplied.

The cancer cells in both the flaxseed groups grew about 30 to 40% slower than the control group.

However, Demark-Wahnefried is of another opinion and says that she is not ready to prescribe flaxseed. “It’s a healthy food. It has a lot of vitamins and a lot of fiber. But we can not definitively say at this point you should take flaxseed because it is protective against prostate cancer,” she said, adding that flaxseed now needs to be studied to see if it can prevent prostate cancer.