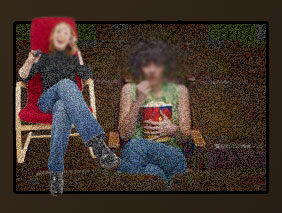 When was the last time you were screaming while watching a scary movie? Do you laugh off frightening scenes of spinning heads or scream in terror? Well, a novel study has found that it could all depend on which version of the anxiety gene you are born with.

The study by researchers from the University of Bonn in Germany has found that feelings of anxiety are linked to different versions of the gene. It further explains that horror movies get a different reaction from different people as unpleasant pictures more easily disturb people who have two copies of one version of the gene.

One of the researchers from the University of Bonn, psychologist Christian Montag mentioned, that he thought the gene variant linked to scaring more easily had only recently evolved, as it was not present in other primates like chimpanzees.

96 women were tested in the study. The women were shown three varying types of images. The first were emotionally ‘pleasant’ ones of smiling babies and cute animals, next were ‘neutral’ ones of items like electric plugs or hair driers and finally ‘aversive’ ones of weapons or injured victims. The study discovered that a chemical in the brain that is associated to anxiety can be affected by a particular variant of the ‘COMT’ gene. The effect of a signaling chemical in the brain that helps control certain emotions are weakened by that version of the gene.

Frightening images startled those who were carriers of two copies of the gene much more than others. On the other hand, scientists found that keeping emotions in check was far easier for those who had one copy of the gene along with one copy of another version.

So the next time a really scary movie doesn’t give you the creeps, just blame it on your genes.