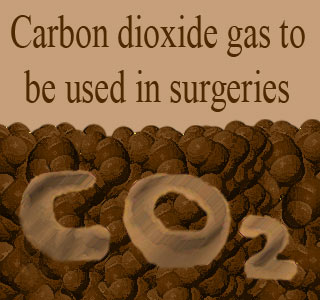 A latest paper states that carbon dioxide gas may, to a certain extent, protect a surgical wound from getting infected and may even increase its healing power. This paper was declared the winner of the 2008 David Horrobin Prize for medical theory by the Medical Hypotheses journal, which is an Elsevier publication.

This prize-winning paper, “Intraoperative CO2 insufflation can decrease the risk of surgical site infection,” was written by Mikael Persson and Jan van der Linden from the Karolinska Institute, Sweden.

The paper authors state that wound infection is a major complication that is usually faced during surgeries. Infections could result in drying of the body tissues, bacterial contamination of the wound and even heat loss. Such complications could lead to an elongated hospitalization and may even increase the patient’s fatality risk.

The prize judge, Sir David Weatherall, Emeritus Regius Professor of Medicine, University of Oxford, says that, “I chose this because the hypothesis revolves around a very unusual approach to an extremely common and important clinical problem and the authors seem to have gone someway to defining the route to which it could be tested by appropriate clinical trial.”

The authors suggest a way of overcoming this surgical problem by continuously flooding the wound during surgery with carbon dioxide gas. This methodology could shield the wound from getting affected by the airborne bacteria, and may also demolish the germs. According to them, humidified carbon dioxide gas could keep the wound warm and moist, which could in turn lower the amount of tissue damage and accelerate the healing process. The authors reason that carbon dioxide gas is at present already been utilized by the food packaging business.

This unique methodology is said to have already been tested in the laboratory, which is hoped to be soon followed by clinical trials on human subjects.

The 2008 David Horrobin Prize is named in the honor of the Late Dr. David Horrobin, a well known researcher, biotechnology expert and also the founder of Medical Hypothesis. This £1,000 prize was launched in 2004 and is awarded annually.

More drinking in less time in bar caused due to loud...