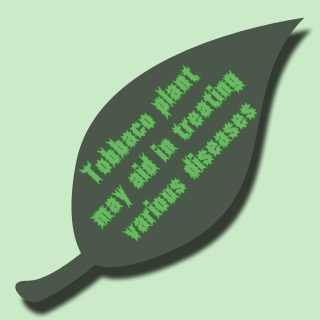 You may have come across innumerable data declaring that tobacco is hazardous and harmful to health. While many experts may have unraveled the potentially deadly effects of tobacco, now a team of investigators have gone in the opposite direction and have highlighted the positive effects that tobacco plants may have.

These investigators are said to have made use of genetically modified tobacco plants to yield medicines for the treatment of various diseases. They state that the medicines produced from these modified tobacco plants could be useful for autoimmune and inflammatory diseases, including diabetes. Various scientists had participated in this study as a part of the Pharma-Planta project. This study was led by Mario Pezzoti from the University of Verona.

Together, these experts were said to have genetically modified tobacco plants to produce two forms of interleukin-10. Interleukin-10 is said to be a potent anti-inflammatory cytokine, which is believed to have positive effects against autoimmune and inflammatory diseases. It has been stated that it may be possible to effectively use these tobacco leaves without having to undergo time consuming extraction and purification procedure. Following this procedure, the experts aim to feed these genetically modified plant leaves to mice suffering from autoimmune diseases, in order to gauge its effect on them.

Pezzoti says that, “Transgenic plants are attractive systems for the production of therapeutic proteins because they offer the possibility of large scale production at low cost, and they have low maintenance requirements. The fact that they can be eaten, which delivers the drug where it is needed, thus avoiding lengthy purification procedures, is another plus compared with traditional drug synthesis.”

It is strange that a plant may have such contrasting effects on the body, when used differently. Where it may have been the cause for various health complications; when used traditionally, it could aid in treating various health problems.

These interesting findings are published in the open access journal BMC Biotechnology.