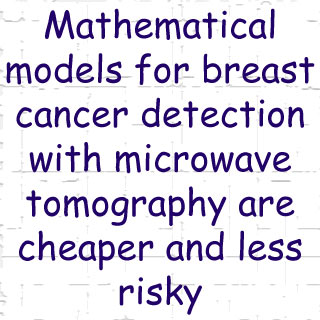 Generally breast cancer is detected by X-ray mammography, but this technique seems to come with its own set of demerits. Some of it disadvantages include being the invasivity of radiation and also very expensive, this supposedly limits their employment. Moreover, many a times X-ray mammograms provide false positives and negatives due to the age of the patient and tissue density. Experts have apparently suggested that a better alternative to X-ray mammography is microwave tomography which not only comes at a moderate price but is also less risky.

The scientists have presented a mathematical model for imaging tumors in the breast by employing microwave tomography. After calculating inhomogeneities in the electrical conductivity of breast tissue, microwave tomography may be able to observe cancers. The researchers allege that a considerable group of low-power microwaves are transmitted into the breast from various positions.

As a result, scattered signals can be accumulated by antennas that surround it. Cancerous cells are known to be high in water content, so malignant-to-normal tissue contrast seemingly appears. Therefore, they are considered to be stronger scatterers as compared to normal tissue. It has been assumed that microwaves measure the electrical properties that are sensitive to physiological parameters namely water content, temperature and vascularization. They also seem capable of putting forth an estimate of mammographic breast density. This estimation is claimed to be an important factor in figuring out a patient’s risk of breast cancer. Having employed well designed algorithms, the experts claim to distribute these electrical parameters in space for reconstructing the image of the breast.

A problem of inverse scattering has apparently been faced, which the scientists claim to resolve by making certain clarifications in the mathematical method. The scientists explained that at microwave frequencies, it is highly nonlinear and therefore the inverse problem is not easy to resolve correctly. However, the problems need not have unique solutions and may not always depend on the data.

Supposedly various used approaches have been misleading. While one was linearizing the problem that can cause immense loss of accuracy, the other includes employing nonlinear optimization and relying on initial apriori information on object shape and electric properties. Even though this provides precise results, its reliability seems to depend on the correctness of the initial information and is computationally expensive.

The latest approach utilizes a qualitative method using ‘sets’ of linear integral equations of the first kind. It should be mentioned that even though they are quick and don’t need apriori information, they are only to give estimates for sets of points. The scientists revealed that they employed a linear sampling method in combination with a gap functional to note the closer fields instead of far fields for obtaining higher accuracy.

The research is published in the SIAM Journal on Applied Mathematics.