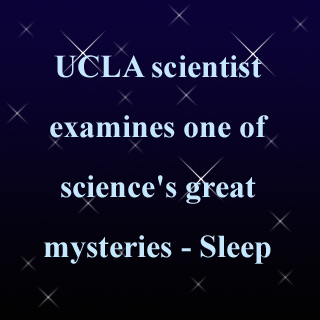 Ever wondered why do you sleep? Well this is one question that even scientists consider as a big mystery. Apparently humans devote one third of their lives sleeping but the sleep researchers still do not know the reason for this. Be it bats, turtles, humans or many other living things, they all sleep yet the fact is still unknown.

A new analysis by Jerome Siegel, UCLA professor of psychiatry and director of the Center for Sleep Research at the Semel Institute for Neuroscience and Human Behavior at UCLA and the Sepulveda Veterans Affairs Medical Center has apparently stated that sleep’s principle objective is to increase animal’s efficiency and decrease their risk by controlling the period and timing of their performance.

The purpose of sleeping seems to be one of the 125 biggest unsolved mysteries according to the journal Science. The theories that range are from brain ‘maintenance’ – including memory consolidation and cutting back to undo damage from oxidative stress suffered when awake so as to enhance prolonged existence. But these theories are not well established. Some theories are jointly exclusive.

Siegel commented “Sleep has normally been viewed as something negative for survival because sleeping animals may be vulnerable to predation and they can’t perform the behaviors that ensure survival.”

Eating, procreating, caring for family members, monitoring the environment for danger and scouting for prey are the activities that are included while awake.

Siegel added “So it’s been thought that sleep must serve some as-yet unidentified physiological or neural function that can’t be accomplished when animals are awake.”

The sleep times of a wide range of animals from platypus and the walrus to the echidna which is a tiny, burrowing, egg-laying mammal covered in spines was observed in the new survey conducted by Siegel’s lab. The research supposedly claimed that sleep is highly adjustable which is like the inactive states seen in large number of species, beginning with plants and micro-organisms. These species have latent states as compared to sleep although nervous systems are supposedly not present in them in many of the cases. So as per Siegel it contests the idea that apparently sleep is for the brain.

Siegel remarked “We see sleep as lying on a continuum that ranges from these dormant states like torpor and hibernation, on to periods of continuous activity without any sleep, such as during migration, where birds can fly for days on end without stopping.”

Hibernation for instance appears to be one activity that controls behavior for survival. As per Siegel a small animal since it cannot migrate during winter chooses to hibernate thus cutting out energy consumption which in turn cuts its need for food. Also it remains safe from predators by hiding underground.

Many factors like time requirements for eating, the cost-benefit relations between activity and risk, needs of migration, care of young ones are taken into consideration to determine sleep duration in different species. Siegel is of the opinion that animals can wake up as swiftly as they can sleep. There is apparently a distinctive mammalian adaptation that allows for a comparatively rapid response to sensory signals. Humans apparently fit into this analysis quite well. According to Siegel, what is amazing about sleep is that even though the body and brain metabolism is decreased, the responsiveness to the environment is still quite high.

Siegel remarked “The often cited example is that of a parent arousing at a baby’s whimper but sleeping through a thunderstorm. That dramatizes the ability of the sleeping human brain to continuously process sensory signals and trigger complete awakening to significant stimuli within a few hundred milliseconds.”

Siegel further added “This Darwinian perspective can explain age-related changes in human sleep patterns as well. We sleep more deeply when we are young, because we have a high metabolic rate that is greatly reduced during sleep, but also because there are people to protect us. Our sleep patterns change when we are older, though, because that metabolic rate reduces and we are now the ones doing the alerting and protecting from dangers.”

On an average in humans, the brain constitutes to about just 2 percent of the total body weight but 20 percent of its energy is consumed during quiet waking. So these savings seem to have a substantial adaptive connotation. Siegel is of the opinion that not only does sleep preserve energy but humans can also have other survival benefits. These include a risk to injury can be reduced, resources can be consumed less and also a decreased threat of being spotted by enemies.

This research is published in the online edition of the Journal Nature Reviews Neuroscience.