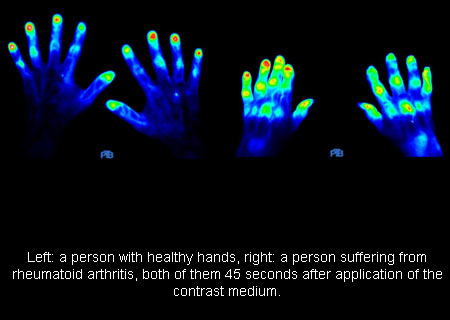 Rheumatism in exact medical terminology is supposedly called ‘rheumatoid arthritis’ and is known to strike anyone. Apparently, it occurs just as often as diabetes, arteriosclerosis and cancer combined. It was estimated that nearly 1 % of the population is stricken with the disease.

Presently, scientists of the PTB, Berlin Institute, in a cooperation project with several partners have developed an early detection method for rheumatoid arthritis. Supposedly, their optical imaging method for rheumatism works with a fluorescent dye. This dye seems to get stimulated by near-infrared light and is completely nontoxic.

Typically it is believed to begin with early inflammation in the finger joints. However, if it is discovered in time and a treatment is begun, chances are good that the dreaded joint damage could perhaps be prevented.

It was believed that with this method, centers of rheumatism could be detected at an earlier stage as compared to an X-ray apparatus. In addition, it seems to be less expensive than a magnetic resonance tomograph.

Following the promising results of a clinical preliminary study still ongoing, the Berlin medical technology company ‘mivenion’ is noted to have obtained licensing rights from PTB in order to prepare a larger study.

Scientists anticipate that people ill with rheumatism may find relief. Also, this method seems to be an example for the successful technology transfer of the results of analysis of PTB.