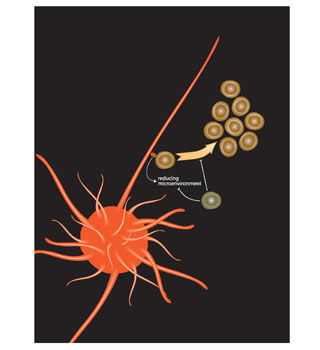 A research from the University of Michigan claims to have exposed a primarily new mechanism that may check aggressive immune cells that could harm the body’s own cells. The findings may unlock a fresh possibility of research for potential therapies for conditions apparently ranging from autoimmune diseases to organ transplants and cancer.

The scientists apparently found that the immune system’s regulatory T cells which are a topic of powerful medical research may manipulate aggressive immune cells by controlling the chemical environment between cells.

U-M biochemistry professor Ruma Banerjee, the research’s senior author and the Vincent Massey Collegiate Professor of Biological Chemistry and associate chair of biological chemistry at the U-M Medical School, commented, “Now we know that the redox environment outside the cell is a very important dynamic. It regulates cell function.”

Processes known as redox chemistry may be essential to understand the manner in which cells may originate and consume energy. Regulatory T cells seem to modify the chemical environment around their aggressive cousins, called as autoreactive T cells, in ways that may either curb them or cause them to proliferate. As per Banerjee, it is possible that this mechanism may be involved in inflammatory bowel disease (IBD) and ulcerative colitis.

Subsequent to probing the process further, Banerjee’s team may like to apply the insights in animal studies. The outcomes may have repercussions for scientists looking for ways to enroll regulatory T cells to strap in misguided autoreactive T cells, and for other research areas as well. Regulatory T cells apparently also influences the immune response in cancer, pregnancy, organ transplants and infection.

Particular T cells in the immune system which may generally assault intruders of the body may be the basis for autoimmune diseases when they respond instead against the body’s own cells. These auto reactive T cells are claimed to be the reason for multiple sclerosis, Crohn’s disease, rheumatoid arthritis, lupus and other diseases.

The U-M scientists discovered that redox chemistry, an upcoming area of concern among scientists, may play a considerable part in the manner immune cells control each other. Redox chemistry apparently plays a function in several diseases. Banerjee is of the opinion that the findings apparently ought to enhance the odds of success in regulating T regulatory cells to curtail disease.

Sanjay Garg, co-author, Ph.D., a research investigator in the U-M Department of Biological Chemistry mentioned that by studying live mouse immune cells cultured in lab dishes, the team discovered that significant redox interaction crops up between dendritic cells. These are claimed to be the first immune cells to identify a foreign agent, and autoreactive T cells. The dendritic cells adjust the chemical environment outside cells in a way that endorses activation of the T cells. But then T regulatory cells ‘intervene in the redox chatter’ and curb that effect.

Banerjee points out that her team needs to do more work to properly comprehend the process before they may use their insights to obstruct or encourage T regulatory cell activity in animal studies of IBD or another autoimmune disease.

Banerjee mentioned that here team is keen to move this into a disease model. This step may make the pathway by which T regulatory cells appear to affect the redox chemistry outside cells easier.

This research was published in Nature Chemical Biology.