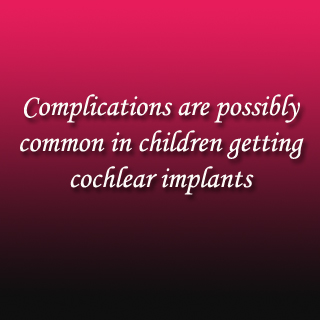 This news may turn out to be quite useful for parents with children needing cochlear implants. A study claims that a few complications could arise in children getting cochlear implants, and appear to be extremely linked with trauma to the ear region and inner ear malformation.

Cochlear implants are said to be electronic devices that may aid in delivering a sense of sound to people who are deaf or acutely hearing-impaired.

Providing as background information, the authors commented, “The success of cochlear implantation as an auditory rehabilitative tool requires a thorough knowledge of indications, limitations and potential risks.”

The authors further added, “Since 1990, the number of pediatric cochlear implants has increased significantly, and more specific pediatric evaluation of the medical and surgical risks can be collected.”

Around 434 patients who experienced cochlear implantation at one facility between 1990 and 2008 were examined by Natalie Loundon, M.D., and colleagues at Hôpital d’Enfants Armand-Trousseau, Paris. Every patient was below 16 years during operation. The median age of participants appeared to be 4.7 years. Around 41 people were younger than 24 months and roughly 43 people suffered from inner ear malformations. They appeared to be tracked for an average of 5.5 years, with impediments trailed and categorized as early i.e. zero to eight days or postponed i.e. over eight days post surgery and major i.e. needing a new admission and/or lengthened hospital stay or minor.

A sum of 43 patients supposedly went through impediments in the follow-up duration. Of these, roughly 28 were overdue, with a standard holdup of around 2.2 years. Roughly 13 of the 43 subjects supposedly experienced re-implantation as an outcome of their complications.

Approximately 24 of the patients suffered from chief complications, counting acute infections, dislocation of the magnet, meningitis, skin cyst in the middle ear, cerebrospinal fluid leak and misplacement of the electrode. About 19 volunteers appeared to suffer from minor complications, counting vertigo, soft-tissue infections, unrelenting inflammation of the middle ear and facial paralysis.

The authors remarked, “Trauma to the mastoid [bony projection behind the ear] area (14 patients) and inner ear malformations (51) were highly correlated with major delayed complications and early minor complications, respectively. Young age at cochlear implantation was not correlated with any type of complication.”

The authors stated, “The finding of complications several years after surgery highlights the need for long-term medical follow-up in this population and the importance of repeatedly providing information to the patients and their family.”

The authors mentioned that the results exhibit that complications linked to cochlear implants are not uncommon and may frequently be postponed. The particular aspects of pediatric cochlear implantation appear to deserve a dedicated, practiced care center.

The study was published in Archives of Otolaryngology – Head & Neck Surgery, one of the JAMA/Archives journals.