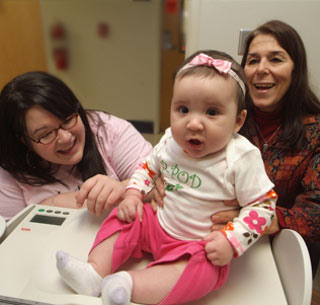 With a new member in the family, the need for providing care, attention and proper guidance does arise. And as Elaine Heffiner puts it, ‘The art of mothering is to teach the art of living to children,’ bringing up a kid may not be all that easy. Sometimes new parenthood stress seemingly leads to post-pregnancy excess weight. Experts from the Georgia Health Sciences University have now linked post-pregnancy excess weight due to new parenthood stress with physical activity.

In order to highlight the probable correlation between new parenthood stress and physical activity, authors thoroughly analyzed 60 first-time mothers. Then higher post-pregnancy BMI was linked to a combination of a high BMI before pregnancy, excessive weight gain during pregnancy, parenting stress and a sedentary lifestyle. For examining the parental stress, subjects were questioned whether they felt like having less time for themselves and if they enjoyed being a parent. Volunteers were also made to recall their physical activity over the previous 24 hours, dividing that activity from light to vigorous.

It was suggested that social interaction can be considered as a measure of well-being that again is connected with higher BMI. Even though women prefer socializing with their friends and not isolating themselves, they may also indulge in sedentary things such as talking on the phone, watching television or hanging out at home, instead of taking their babies on a walk together. In the current study, new mothers with a higher BMI apparently endured more depressive symptoms, but overall felt competent as parents. Mothers with lower BMIs reportedly were more physical activity and had less depressive symptoms.

“Sedentary lifestyle, or a low amount of physical activity, was most influenced by the type of parenting stress the mothers reported,” elucidated Dr. Deborah Young-Hyman, behavioral psychologist with the Georgia Prevention Institute. “More parenting stress, especially depression, was associated with less physical activity and a higher postpartum BMI.”

Investigators believe that physical activity enhances mood and aids in losing weight. Due to lack of stress, weight after childbirth can be seemingly regulated as relaxed moods are associated with lower caloric intake as well as higher activity. In conclusion, it was mentioned that parenting stress purportedly influences the postpartum lifestyles of new mothers. Further attempts will be made to help new moms create healthy lifestyles for themselves and their babies.

The study is published in Women and Health.