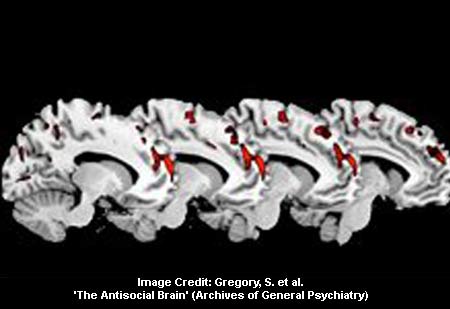 As it is often quoted, ‘All cruelty springs from weakness.’ And scientists from King’s College London have identified this weakness associated with psychopathy.

Found in the journal, Archives of General Psychiatry, the study showed that psychopathy falls under a sub-class of antisocial personality disorder (ASPD). For the study, the team conducted MRI scanning of the brains of 44 violent criminals fitting the diagnostic criteria for ASPD. Out of the participants, 17 were diagnosed with ASPD and psychopathy, while 27 seemed to be affected by the former alone.

Dr Nigel Blackwood from the IoP at King’s and lead author of the study elaborated, “Identifying and diagnosing this sub-group of violent offenders with brain scans has important implications for treatment. Those without the syndrome of psychopathy, and the associated structural brain damage, will benefit from cognitive and behavioural treatments. Optimal treatment for the group of psychopaths is much less clear at this stage.”

According to what was observed, those inflicted by both the aforesaid conditions seemed to manifest decreased grey matter volumes in specific brain regions. This was not the case of those suffering from just ASPD or the controls. As the team puts it, abnormalities in the prefrontal cortex of the brain may signify lack of empathy, remorse and guilt. It also connotes low self-introspection and insensitivity to fear or adversity.

Though cognitive therapies have shown promise in treating psychiatric conditions, an optimal therapeutic alternative for psychopathy has not been revealed so far. Treatment procedures involving counseling and other forms of behavioral therapies may work.