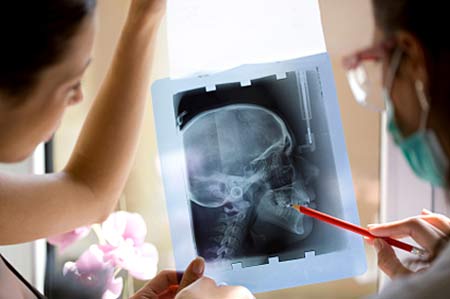 A simple visit to a dentist and we may have to undergo an array of dental X-rays. Now, experts at the Yale University have revealed that frequent tooth X-rays could be related to a non-cancerous brain tumor called meningioma.

Though this disease is considered to be rare, it does manifest into a range of side-effects such as vision loss, headaches, speech and motor disabilities, even in the non-cancerous stage.

For the study, almost 1,433 patients suffering from meningioma were examined. Another control group with similar symptoms but devoid of the disease were also studied. The participants in the trial were aged above 57.

Shockingly, meningioma patients seemed to be two-folds likelier to have undergone bitewing exams more frequently. The latter is a procedure where an X-ray surface is placed onto the teeth separated by a thin tab.

An association between the disease risk and an alternative process called panorex dental exam also apparently came forward. In this imaging technique, an X-ray is located in the exterior of the mouth to create a single photo of the complete set of teeth.

In case of individuals receiving this test at an age below 10, the risk factor appeared to be five times than those not exposed to it. Irrespective of age, the panorex dental exam seemingly elevated the risk associated with meningioma by 3 times, both in cases of yearly and more frequent examinations.

The analysis comes as an important caution that dental X-rays need to be used optimally. It is published in Cancer, American Cancer Society’s journal.