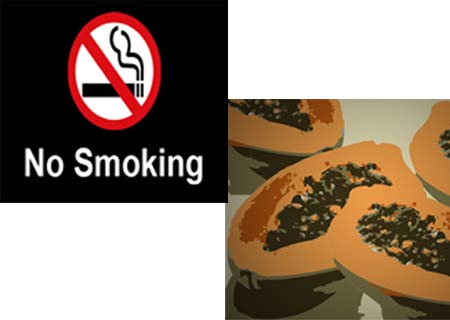 Smokers need to eat vegetables and fruits to kick off the habit, says a team from the University of Buffalo (UB). In terms of present remedies like nicotine patches, this analysis seems to have put forth a relatively simple solution to quit smoking.

Reported in the journal Nicotine and Tobacco Research, the study involved nearly 1,000 smokers aged 25 and more. They were surveyed regarding their smoking habits and frequencies via random telephone calls. A follow-up session was conducted after a span of 14 months, to check if the volunteers had given up their habits or not.

“We may have identified a new tool that can help people quit smoking. Granted, this is just an observational study, but improving one’s diet may facilitate quitting,” remarked Jeffrey P. Haibach, MPH, first author on the paper and graduate research assistant in the UB Department of Community Health and Health Behavior.

According to the outcomes, smokers consuming more fruits and vegetables apparently smoked less number of cigarettes in a day. They also seemed to have their first smoke after a long time during the day. The same group scored fewer points on the scale of nicotine dependency.

Another important point to note is that fruits and vegetables apparently rendered the tobacco distasteful, as compared to meats and hard drinks which enhanced the taste of nicotine. A healthy diet could soon find place in the checklist of ways to quit smoking, if this study is anything to go by.